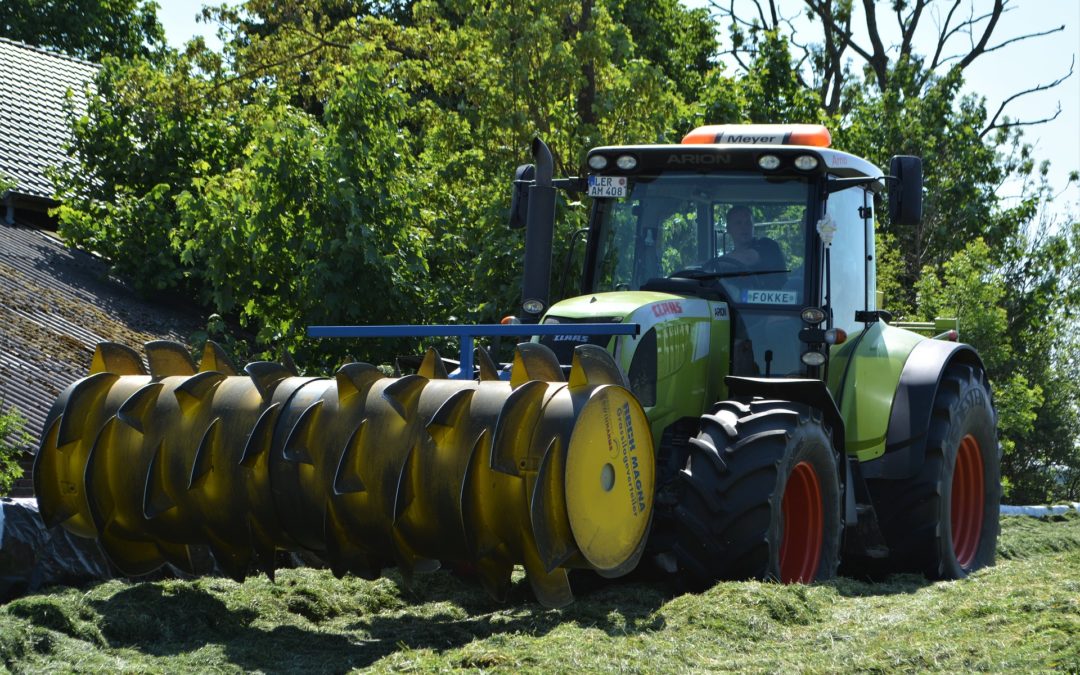 When deciding which is the best grease for tractors, one must consider all the factors that a tractor must deal with. There are many greases available for the agricultural market, but if the correct grease is chosen, the ROI (return on investment) can be substantial. Taking into consideration the tough and current economic environment, farmers across the country will want to take careful consideration in the type of grease they choose to use in their equipment. That choice can have a huge impact on their bottom line.

There are a variety of greases on the market with varying levels of quality and performance. It is important to take a deep and critical look at the history of what your current grease has delivered in terms of performance. How much grease has been consumed in one year? How much time has been spent greasing your farm equipment? How many bearings have been replaced during this past year? Bushings, pins, etc.? Ask yourself the question: how well do you feel your equipment is being protected by the current grease you are utilizing?

There is always a better product and grease is no different. By looking at the actual performance history of your grease, it is possible to exponentially improve your maintenance situation simply by choosing the best grease for tractors.

5 Parameters to Consider When Choosing the Best Grease for Tractors 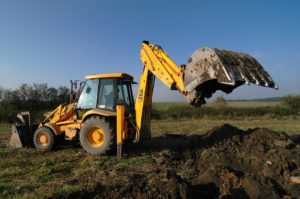 The best grease for tractors is one with an ability to withstand extreme pressure and shock loads, plus have a 75+ Timken OK Load rating.

Farm equipment such as tractors can be exposed to a tremendous amount of stress and strain due to extreme pressure in various applications such as shock loads, jolting, pounding, vibrations, etc. These types of brutal operating conditions can force greases to be pushed, pounded out, or displaced. If a grease is displaced or pounded out, the potential for metal-to-metal contact is real and could lead to unwanted wear and exposure to damaging contaminants such as dirt and water.

During these extreme pressure conditions, the best grease for tractors would be a grease that can withstand the most extreme shock loads without being pounded out and also cling tenaciously to the metal surface, all the while acting as an armor-like barrier against any outside contaminants. When searching for a grease with extreme pressure capabilities, it is helpful to look at the grease manufacturer’s technical data sheet. 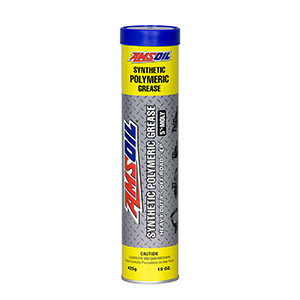 If you’re a farmer looking to provide the best possible protection for your equipment, there are better extreme pressure greases on the market. When looking for the best grease for tractors, one must turn to more specialized custom lubricant manufacturers. One such company would be AMSOIL. AMSOIL offers a Synthetic Polymeric Grease. This grease utilizes unique over-based calcium-sulfonate complex thickener, along with the unique and exclusive synthetic polymeric technology. This grease delivers superior protection against any type of shock loads or heavy loads.

AMSOIL Synthetic Polymeric Grease outperforms the competition in extreme pressure applications in heavily loaded applications and will stay in place longer than other greases. Also, AMSOIL Synthetic Polymeric Grease contains 5% molybdenum disulfide. Moly can withstand 500,000 pounds per square inch of pressure. The 5% moly helps this grease deliver 75+ pounds of pressure on the Timken OK Load Test. Utilizing a grease in your tractor with 5% moly provides an extra insurance policy when your tractors are exposed to extreme pressure and shock loading conditions. Because of its superior extreme pressure capabilities, it is the best grease for tractors.

It is important to be aware of the consequences when operating your farm equipment in wet environments. How does your grease protect and respond when exposed to water and moisture? Is your grease being washed away due to over-washing of your equipment? Knowing how resistant to water your current grease is can help you understand how it is performing in a wet environment. Is your abnormal grease consumption due to your grease’s inability to deal with water? Are the metal surfaces of your lubricated equipment being exposed unnecessarily to contaminants because your grease is being washed away by water? Is the need to grease you equipment more frequent than normal due to water washout of your grease? 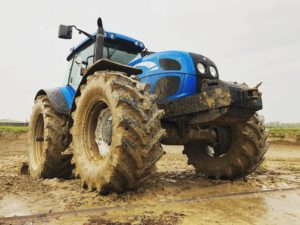 AMSOIL Synthetic Polymeric Off Road Grease is highly water resistant with a water washout rating of 1%, which is 5 to 10 times better than conventional greases.

Utilizing a grease that is extremely resistant to water washout will have a direct impact on your maintenance program. It will determine how much downtime you have an how much money is being spent by damaged parts due to grease being washed away by water. There is a simple way to check the water resistance of your grease, and that is to simply read your grease manufacturer’s technical data sheet. The standard industry test for water washout is called the Water Washout Test, designated as ASTM D-1264. 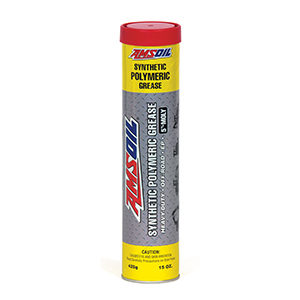 A grease that can resist water washout will maintain a tough seal on the grease components and thus prevent any moisture, water, and other potentially damaging contaminants from entering wear-prone areas.

When deciding to protect your farm equipment from damaging water and moisture, is is an excellent strategy to choose the absolute best grease for tractors, especially one that is proven to be extremely resistant to water such as the AMSOIL Synthetic Polymeric Off Road Grease.

One of the obvious reasons that one lubricates farm equipment is to prevent wear. An excellent indicator of a grease’s capability to reduce friction and wear is to check the grease manufacturer’s technical data sheet for its rating when tested on the ASTM D-2266 Four Ball Wear Test. The Four Ball Wear Test was created to measure the amount of wear allowed to a metal surface when that metal surface is lubricated and protected by a specific grease. Four Ball Wear Test results are specified in millimetres (mm.) The industry average for most conventional greases falls within a range of .65 to .90 millimetres in wear. 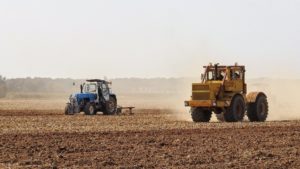 Dust, dirt, and other contaminants can wear out parts quickly. AMSOIL synthetic grease creates a tenacious barrier that keeps contaminants out and reduced friction and wear.

The hope is to get the lowest possible wear mark number for this test. The lower the wear score, the longer the life of the components being greased. AMSOIL’s Synthetic Polymeric Off Road Grease scored less than .45 millimetres in the Four Ball Wear Scar Test. Additionally, the same grease was put through the ASTM D-2596 Four Ball Wear Weld Point, which is measured by kgf (kilograms of force.) It scored an industry leading 620+ kgf.

Due to AMSOIL utilizing synthetic base stock oils whose molecular structure if of the same sized molecules, this allows the base oil to reduce friction. Blended into the synthetic base oils, AMSOIL chemists utilize the finest friction modifiers, anti-wear additives, EP agents, along with 5% molybdenum disulfide. The base oil along with the unique additive package work together synergistically to protect all metal surfaces from friction ,wear, and any extreme pressure loads that the metal surfaces could be exposed to. AMSOIL has truly engineered the best grease for tractors when the goal is to minimize friction and wear.

Conventional farm equipment greases typically have dropping points that range between 290 degrees F and 390 degrees F. They offer a maximum operating temperature from mid-200 degrees F to low 300 degrees F range. During the hot summer months, farm tractors have pushed hard and long and these tough / hot environments can and will expose farm equipment to operate in much higher ambient temperatures.

When equipment is running hard during higher ambient temperatures, this can cause conventional greases to thin and start to break down. When a conventional grease is forced to operate close to its maximum capabilities, there is very little margin of safety and thus the grease’s performance starts to diminish. As the extreme heat starts to degrade the oils in the grease, some of its capabilities in protected against extreme pressure or Timken OK Load can start to drop. 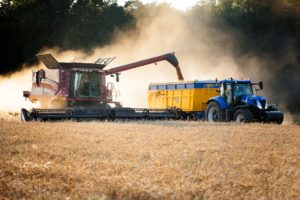 Hot summer ambient temperatures can be brutal on both farm equipment and grease. AMSOIL synthetic grease has a dropping point of 650 degrees F.

As this heat starts to degrade the grease, it can also weaken the grease’s ability to resist water. Choosing the best grease for tractors means choosing a grease that offers a very large and wide safety net of performance in terms of its ability to deal with high temperatures. Conventional greases do not offer such a safety net for the farmer and his equipment. What type of a temperature range would constitute a high temperature grease? One particular grease to consider is the AMSOIL Synthetic Polymeric Off Road Grease.

To test its ability to withstand extreme heat, it was put through the ASTM D-2265 Dropping Point Test. The AMSOIL grease delivered a dropping point rating of 650 degrees F. This offers the farmer an extremely generous safety net if and when your equipment is forced to operate in extremely hot conditions.

This is considered a superior rating and it is quite doubtful there are many other greases in the agricultural industry that could compete with this type of dropping point. The unique aspects of AMSOIL’s Synthetic Polymeric Off Road Grease lies in its balanced chemistry and its ability to score superior ratings in a multitude of tests.

Most conventional greases may offer a good score on only one of many tests. For example, they may be a high temperature grease but offer poor EP capabilities and very poor water washout rates. On the other hand, AMSOIL makes it a point to engineer their greases to perform far better than average in all the important areas that a grease for farm equipment must deal with.

Having a grease that can provide balance across all performance parameters earmarks it to be the best grease for tractors.

For the farming operation that needs their equipment to be in the fields for extended periods of time and without downtime, then it is extremely important to carefully choose a heavy duty grease that delivers severe duty performance and extended service intervals. This rules out conventional greases. It must resist extreme pressure pound out and without a doubt must significantly be able to reduce the volume of grease that may be ejected while being exposed to continuous shock loads and pounding action. The best grease for tractors is the AMSOIL Synthetic Polymeric Off Road Grease due to its superior capability at delivering extended service intervals and vastly reducing grease consumption. 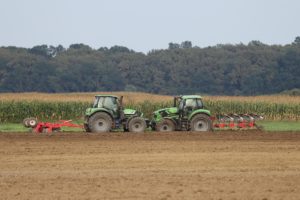 By choosing the best grease for tractors, you can reduce grease consumption by 50% plus extend service intervals.

Real field tests have shown that it is able to reduce grease consumption by up to 50%. This translates to the farmer being able to maintain its current maintenance schedule and utilize less grease per application. Another strategy is that it can increase the time between re-greasing intervals.

By being resistant to shock loads, offering longer service intervals, and providing amazing protection, you reap the benefits in reduced equipment replacement, labor, and lubricant costs.

In summary, seek out an EP grease with a 75+ Timken OK Load. Choose a water resistant grease with a 1% water washout rating. Choose a friction-reducing grease that scores .45 mm or less on the Four Ball Wear Test. Pick a grease with a 650 degree F dropping point. Lubricate with a grease that reduces consumption by 50% and extends service intervals. When you find a grease that meets all these performance parameters, you’ll have undoubtedly found the best grease for tractors! 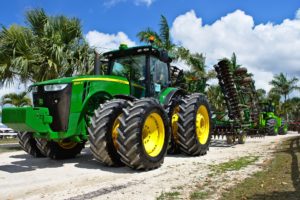 Large or small tractors, regardless of their size, deserve to be protected with the best grease for tractors. Save money and downtime with AMSOIL Synthetic Polymeric Off Road Grease.