Let’s start this blog post on the best oil for high mileage diesel engines with a frequently asked question: “I am considering replacing the petroleum oil in my diesel engine with synthetic engine oil in a motor that has 100,000 miles on it. I have heard that synthetic might clean the engine and cause plugging of the oil filter and passageways. Is this true?”

We’ll answer this question by referencing AMSOIL synthetic lubricants. The answer is absolutely not! Switching from conventional/petroleum oil to AMSOIL Signature Series Max-Duty Diesel Engine Oil in a consistently and routinely maintained vehicle will not cause oil filters or passageways to clog, regardless of mileage. For clogging to take place, there would need to be significant amounts of sludge to be present. Sludge occurs due to inferior quality oil and poor maintenance practices.

If sludge is present in significant amounts within a motor, then it’s just a matter of time before passageways and oil filters become clogged, regardless of switching to a synthetic engine oil such as from AMSOIL.

What is the difference between conventional oil and synthetic oil?

Let’s answer another frequently asked question: “What is the difference between conventional oil and synthetic oil?” The first part of that answer is that engine oil, whether petroleum or synthetic-based, consists of molecular chains of carbon and hydrogen atoms, referred to as hydrocarbons. Petroleum crude oil drilled from the ground is an extremely viscous liquid that is highly flammable with a greenish or dark brown color that has a high energy density. Petroleum crude oil contains many unwanted elements that exist within the complex molecular chain of hydrocarbons.

These unwanted contaminants include oxygen, sulfur, nitrogen, plus metal components such as vanadium. Petroleum crude oil is the raw material that produces a broad variety of petrol chemicals such as plastics, solvents, fertilizers, fuel, and lubricating oils. When refining crude oil, a sophisticated process is used that separates the various types of molecules that exist in the oil by weight. The end result is a byproduct that lends itself to the manufacturing and processing of such products as gasoline, diesel fuel, kerosene, LPG, and various other lubricating base stock oils.

Lubricant chemists are able to finally hone and tune the exact molecular composition they need for the synthetic base stock oils, which is the key to their superior performance properties. By designing molecular structures in a highly planned and strict fashion, this delivers molecules and end products that offer far more stability than their refined petroleum counterparts.

Modern diesel engines, especially those with turbochargers, generate a huge amount of heat compared to their much older counterparts. When temperatures become elevated, especially during extreme service conditions or when hauling during hot summer temperatures, conventional petroleum-based diesel engine oils’ lighter weight molecules can volatilize or boil off. The more volatile an engine oil is, the lower the temperature at which it begins to boil off or evaporate. The more oil that is consumed or evaporated, the less volume of oil that is left to protect critical engine parts.

When this happens, the owner/operator must replace the lost oil much more frequently. When the lighter molecules in an engine oil begin to volatilize when exposed to heat, the engine oil’s viscosity tends to increase. As the engine oil thickens, it causes the motor to have to work harder. The end result is negative and the following issues appear: a reduction in performance, inferior fuel economy, an increase in engine deposits, inferior cold temperature starting, and finally, an engine oil formulation that becomes unbalanced, which can lead to a higher concentration of additives than what was formulated.

To protect and prolong a diesel engine that has more miles on it, it is critical to use a motor oil that is designed to consume oil at a much lower rate. As the diesel engine ages, it becomes even more critical and important to protect the engine parts and to keep the vehicle on the road earning money as opposed to losing money due to unforeseen and unnecessary downtime. The best oil for high mileage diesel engines that offers much lower oil consumption is AMSOIL Signature Series Synthetic Max-Duty engine oils.

This AMSOIL diesel engine oil offers a very low rate of burn-off or volatility. It delivers up to 76% less oil consumption than specified by the API CK-4 standard in the Caterpillar-1N Oil Consumption Test. Reducing oil consumption by 76% during engine operation translates to far less oil vapor passing into the combustion chamber.

Another area to consider for a high mileage diesel engine is the ability to control viscosity in engine oil. High-performance engine oil that utilizes top-of-the-line synthetic base stock oils will be naturally resistant to oxidation. Such oil will also be resistant to the thickening effects of soot contamination. AMSOIL Signature Series Max-Duty is engineered with boosted detergent/dispersant additives whose job is to keep soot particles suspended independently, thus preventing the formation of wear-causing particles. By using a superior detergent/dispersant additive package along with the finest synthetic base stock oils, AMSOIL helps to control viscosity increase. Soot-related wear is also controlled.

Remember, these thermally stable synthetic base stock oils used by AMSOIL offer extremely low volatility, which further helps to maintain viscosity even after extreme temperature service. To maximize engine protection and efficiency, the best oil for high mileage diesel engines is from AMSOIL.

An inferior petroleum/conventional oil can cause cylinder liners and rings to wear faster than normal. This type of wear can cause oil consumption and a loss in compression, which results in poor fuel economy and a reduction in power. AMSOIL Signature Series Max-Duty 5W30 Diesel Engine Oil was put through an independent test called the Detroit Diesel DD13 Scuffing Test for spec DFS93K222. The end result was that this AMSOIL diesel engine oil delivers six times better wear protection. If your goal is to get the maximum out of your diesel engine, then switching to AMSOIL Signature Series Max-Duty will deliver the type of protection your hard-working diesel engine wants and requires. 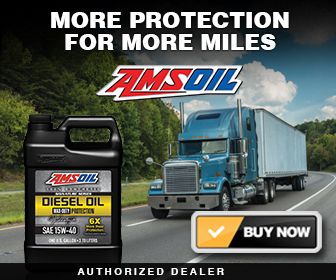 What is the best oil for high mileage diesel engines?